One of the most common forms of medical malpractice we see comes from radiologists. This blog will explain why that is so and why it is so dangerous for other providers to rely only on the radiologist’s interpretation of a study. 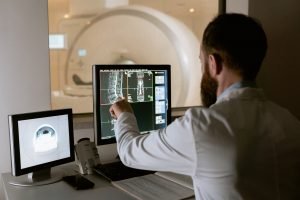 What is radiologist malpractice?

A radiologist commits medical malpractice if he or she does not act as a reasonable and prudent physician. This can include missing a finding on an imaging study or not timely reporting an important finding.

Why do so many radiologists commit malpractice?

Did you know that many radiologists are not in the hospital when they read your study? This is called “teleradiology,” and it is becoming more and more common as hospitals try to make as much money as they can off of each patient. The teleradiologist sits in his/her home or office and reads hundreds of studies from various hospitals or centers. Amazingly, some of these hospitals or centers are not even in Arizona!

The radiologist is more likely to miss something significant if he or she has too many studies to read. For example, a radiologist should spend approximately 10 minutes interpreting all of the images in a basic CT study. If he has too many other studies waiting for him, though, he is more likely to only spend a couple minutes (or even less!) reading the study. If that happens, the radiologist will likely miss an important finding and the patient will suffer as a result.

Another reasons radiologists miss so many findings is because they often start with the presumption that they will not find anything significant on the images. That frame of mind will make it more likely that the radiologist will miss something.

What happens if a radiologist commits malpractice?

If a radiologist misses a significant finding it can have disastrous consequences. A patient may not get emergent surgery that he or she needs. Any delay in diagnosis and treatment can result in catastrophic injury or death.

What about the other providers? Shouldn’t they be the safety net?

The most common question we hear from clients and jurors is, “I understand that the radiologist missed it, but how come no other doctor caught it?” It is a very good question because it is spot on. In a lawsuit, the other doctors often try to just blame the radiologist. “If the radiologist had properly interpreted the study, I would have done ____.” While this may be true, their attitude ignores the fact that they also have an obligation to properly diagnose the patient. It is not proper to simply rely on a negative read and discharge the patient home. If the patient’s signs and symptoms are inconsistent with a negative read, the treating doctor(s) must order a repeat imaging study. This is particularly true if more than 24 hours has passed since the initial study. Ordering a surgical consult may also be a better way to properly diagnose the patient. It is never within the standard of care to just rely on the radiologist’s interpretation.

If you have any questions about radiology malpractice, please call us at 602-224-0005, or contact us via the form on our website.